Very inspiring!  It’s still in the early stages, but offers concrete hope for the future!

A man who was paralysed from below the neck after crashing his bike into a truck can once again drink a cup of coffee and eat mashed potato with a fork, after a world-first procedure to allow him to control his hand with the power of thought.

Bill Kochevar, 53, has had electrical implants in the motor cortex of his brain and sensors inserted in his forearm, which allow the muscles of his arm and hand to be stimulated in response to signals from his brain, decoded by computer. After eight years, he is able to drink and feed himself without assistance. 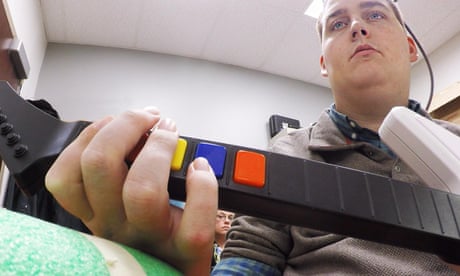 “I think about what I want to do and the system does it for me,” Kochevar told the Guardian. “It’s not a lot of thinking about it. When I want to do something, my brain does what it does.”

The experimental technology, pioneered by the Case Western Reserve University in Cleveland, Ohio, is the first in the world to restore brain-controlled reaching and grasping in a person with complete paralysis.

For now, the process is relatively slow, but the scientists behind the breakthrough say this is proof of concept and that they hope to streamline the technology until it becomes a routine treatment for people with paralysis. In the future, they say, it will also be wireless and the electrical arrays and sensors will all be implanted under the skin and invisible.